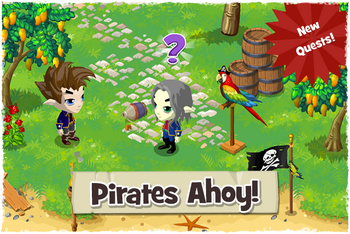 We had an update yesterday with some new items and a new questline called The Hunter of Booty! It ends with a special achievement, Pirate Chest, and Title.

There be a new pirate on the scene... a real pirate apparently, and not some 'jumped-up fisherman'. Players who have hit level 32 should head over to the Secret Pirate Island of Mona and investigate. By the sound of things he's in the need of a seasoned Treasure Hunter!

Pirates not only enjoy Rum, but are partial to Grog on occasion too. It's an acquired taste...

There are a few secret achievements in there...

For all you would-be pirates, there is a new decorations bundle that should give you everything you need to turn your homestead into your very own Secret Pirate Hideaway!