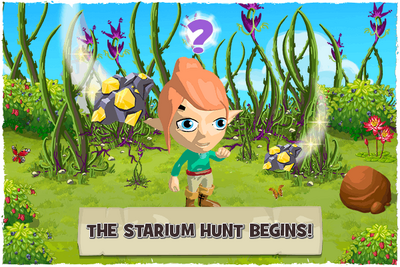 "The Alchemists' Society has some news for you, Trappers: we're getting reports of even more Starium falling from the sky, and we're seeing a surge of Creep Trees & Creep Vines as well!

A lot of Trappers have checked in saying they've come across these things while out on their travels. Have YOU seen anything suspicious while out and about? Let us know, Trappers!" - from the Facebook Fan Page on July 17th, 2013

"There are 4 locations per day (This may not appear for every player). Therefore if you find one spot, you can locate the other 3. In order to retrieve the Starium and Creep Vines you must travel to spots in hopes of finding them. The locations reset once a day around 2 AM universal time." - HBM Forum Admin

"There is no guarantee that you will find Starium everyday - but - If you find one location during the hunt, you will be able to find 3 other locations with Starium. Follow the list of locations until you find all 4." - Wiki Admin 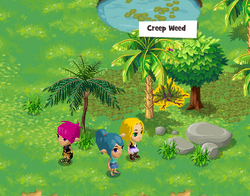 Many players will be able to randomly find Starium, Creep Vine and Creep Weed at different locations throughout the world.

For the first day of this update, many players were able to find these locations with the purple exclamation point marking it on their map - however it appears this feature was removed. Now players are finding these items at random locations that are different for each player.

There does not appear to be a minimum player level requirement or quest progress requirement to be able to find these items.

According to the forums, these items may appear at 4 random locations for each 24 hour period (per player).

If you find one in a location and can't find the other items, check the Starium Route Pictures for the locations; some of them are behind trees and can be very hard to spot.

There are 35 confirmed locations.

Note: Players who began after October, 2013, will never find Starium Hunt starium at the locations marked with *.

Retrieved from "https://herebemonsters.fandom.com/wiki/The_Starium_Hunt?oldid=82874"
Community content is available under CC-BY-SA unless otherwise noted.