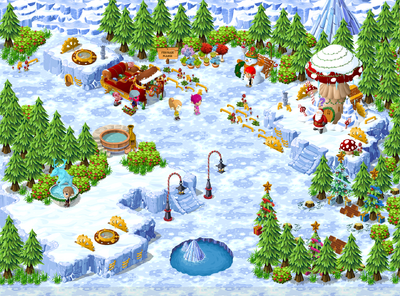 The Santa's Grotto is a location in Finland, Europe. This location was introduced during December 2012 and is a special location during Frost Fayre.

This is a city location with several characters, a Frost Fayre Stall to purchase specially themed items, and a Frost Fayre Wishing Well. Similar to London, none of the resources at this location can be gathered and you can not trap monsters here.

This location is needed for the following quests:

The following characters can be found at this location:

Wikipedia has an article about this topic:
Santa's Grotto
Retrieved from "https://herebemonsters.fandom.com/wiki/Santa%27s_Grotto?oldid=81072"
Community content is available under CC-BY-SA unless otherwise noted.