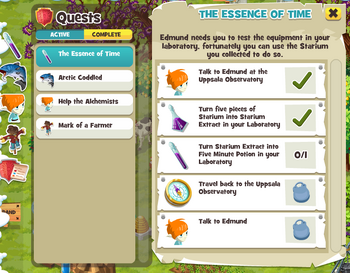 Quests are given to you by many characters in the game and drive the storyline of your adventures. All quests unlock in a roughly linear pattern - though some quests require the completion of a side quest line to continue with the main story.

New quests will appear on the top left side of your screen as icons, and in your Quest Log. To see a full list of all your available and completed quests, click on the Quest Log Icon. The icon appears under the icons of three active quests and looks like a red shield. Areas with active quests show up on your map with a purple exclamation point. If you hover over the location on the map, you will see which quest is active at that location. You are able to travel to many locations for free during quests.

Daily Quests were added to the game on September 3, 2014. For more information visit the Daily Quest page.

The main storyline moves through Europe into the Far East and is accompanied by a series of quests surrounding several shipwrecked characters who train you to fish. Once you complete the Guardian of Stonehenge Quest Line, the quest lines split between two main tasks of preparing for the Chef of Steel Competition and working with the House of Li to stop Zhong Kui.

To show quest progression in this order, we've organized the quests based on which continent they are centered around and split the Far East section between the overarching story type.

Retrieved from "https://herebemonsters.fandom.com/wiki/Quests?oldid=80874"
Community content is available under CC-BY-SA unless otherwise noted.