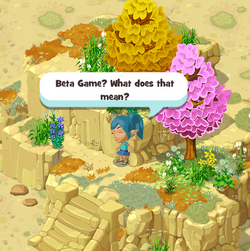 Here Be Monsters is currently in Open Beta (as of November 27nd 2012).

Games go through a few basic stages when they are created before they can be Officially Released.

What does that mean?

The game developers are still adding new objects and elements to the game regularly, and changing items already in place. They are looking for a balance between creating interesting/challenging content that is also entertaining and fun for players. There are changes to experience rates and the game economy (how much an item is worth), and difficulty or drop rates. You may log into the game and find that locations you visit look different, or have more of a certain type of plant.

With each big game update there may be new game bugs. The developers will spend a fair amount of time balancing the game economy, tweaking features, adjusting tutorials and early game play, reading player feedback, and updating the game with bug fixes.

Beta testers are anyone that plays a beta game. They are incredibly important to Beta games because they are able to find unique game bugs that didn't occur in initial testing and report back to developers. They also provide feedback for current and future game content.

For more information on this subject see: on Stages of development

Retrieved from "https://herebemonsters.fandom.com/wiki/Beta_Game?oldid=83487"
Community content is available under CC-BY-SA unless otherwise noted.